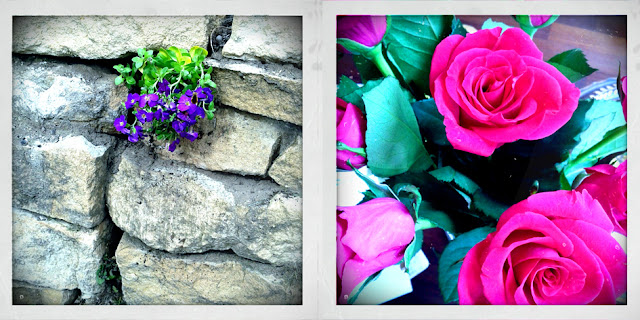 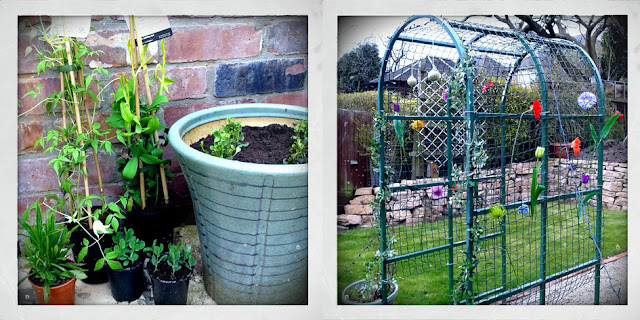 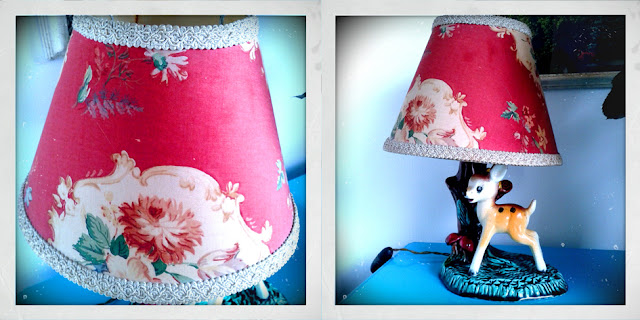 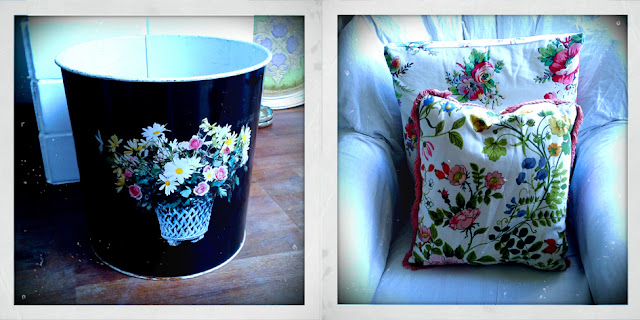 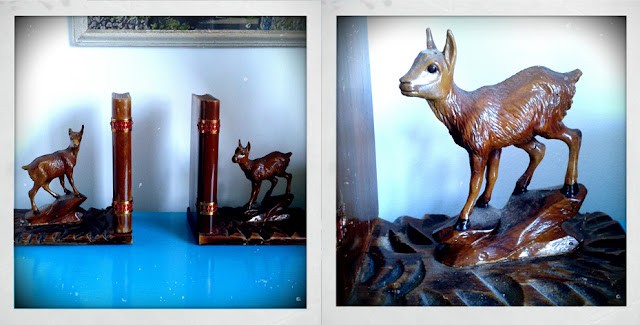 It's been a whirlwind of a week.

Saturday was very grown up. We finished some impromptu tiling in the kitchen. It now looks like a proper kitchen and the kind of thing that only real grown ups could possibly get excited about. 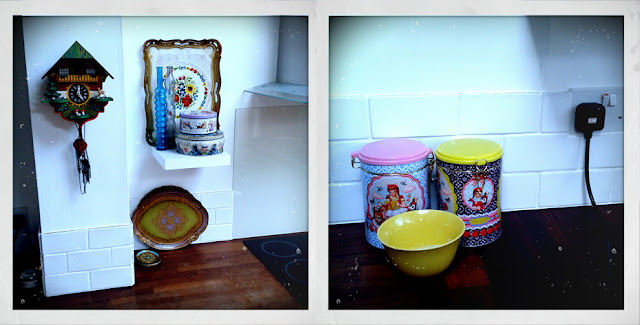 Saturday night saw us going round to our friends for a cheese and wine evening. It was like a grown up picnic. But we still got as drunk as foolish youths. And stayed up late. Yeah.

I went as a Spanish senorita. With big hair as practised on the left. 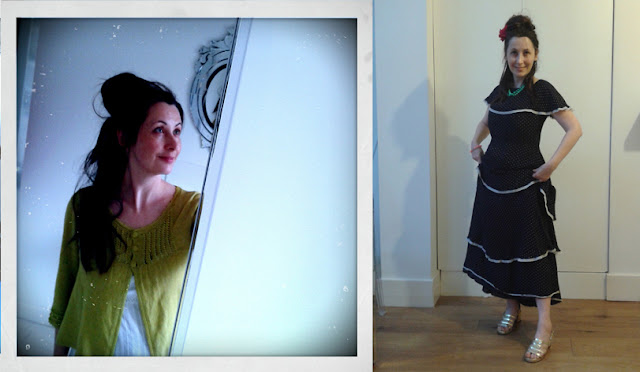 On Sunday, a rare trip into town for some emergency work shirts. We came across an International market in the Market Square. A whole stall of French garlic. Four Dutch lavenders for a fiver. 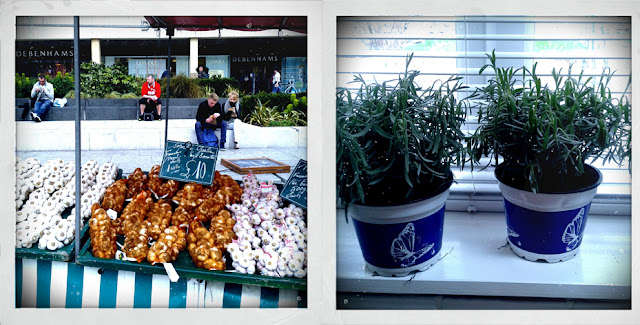 The Winner Takes it All, tiquana style, followed by Strangers in the Night. It was joyful. I got sucked in by the sound of Edith Piaf and found myself buying Artisan olive bread. 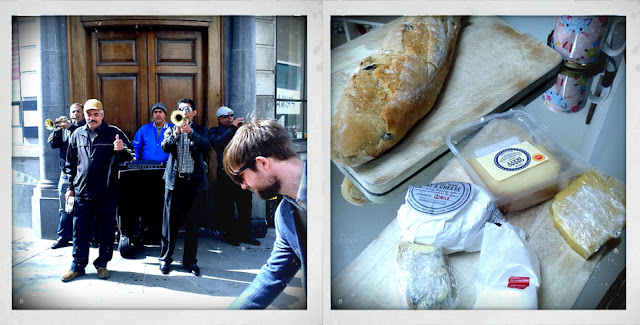 I've messed around with this cupboard. Tried three colours so far and it's still not right. But I've lost the will to carry on, so baby pink it remains until inspiration strikes.

From a source unknown, I found the strength to clean the bathroom. Yes, I manage this lifestyle without staff. I know.

Today I received a gorgeously presented parcel in the post from my friend Serena. She thought this little picture was very 'me'. She was right. I want to live right there, in one of those little wooden houses. 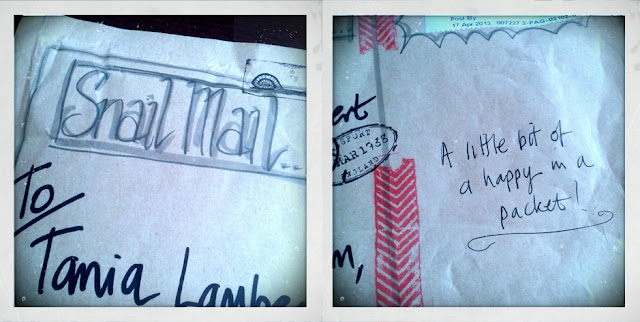 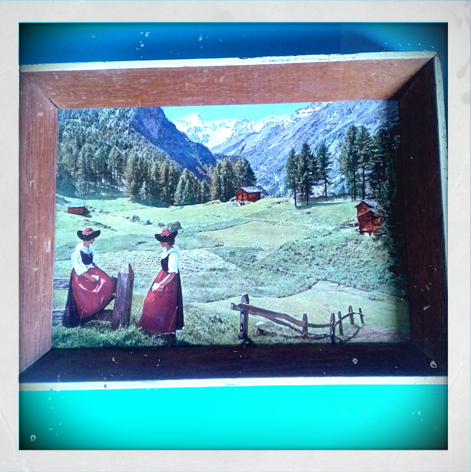 Finally, I've just been door stepped by a cold caller. He was selling a potion for cleaning window frames. He started scrubbing before I could think of a nice way to say 'Go away please'.  I was a sitting duck. Those frames haven't been cleaned in the three years we have been here, so they scrubbed up a treat. His potion was made to look magical and his sentence and breath went on for several minutes. I handed over the money just to stop him talking. Spit would have done just as well.

Have a lovely weekend, and remember, don't answer the door bell. You too could end up with a potful of blue gunk.
Posted by freckleface at 14:03 16 comments

Email ThisBlogThis!Share to TwitterShare to FacebookShare to Pinterest
Labels: food glorious food, out and about, what i wore

The great bloggy meet up

We came from the North, South and East and converged on the West. The West Midlands to be specific, courtesy of our lovely Vix!

Our host was beautiful, warm and vivacious, just like on her blog. And people really do randomly talk to her. As we were crossing the road a lady shouted out, 'I love your trousers'.
Just like the three Kings, we came bearing gifts.
The other 'Kings' were Clare, who is so sweet and friendly with a great eye for finding treasure and Curtise who arrived late but brought bags of energy and fun to the proceedings.

The agenda read as follows:

1 coffee at the art gallery

2 mooch round the market, fighting off the competition to find cheap treasures at the 20p stall 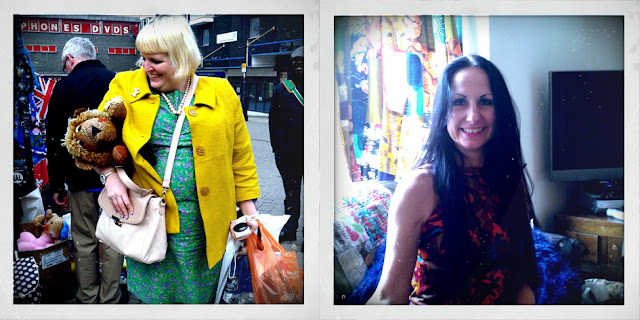 3 meet Curtise and go for lunch 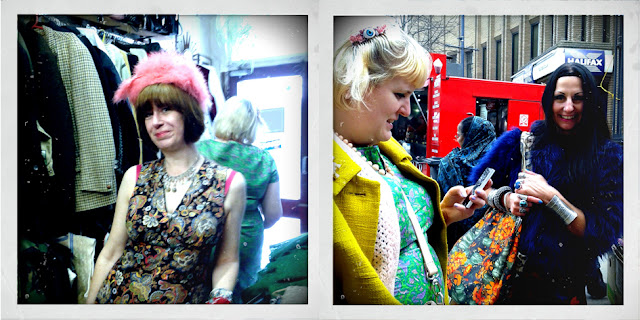 4 go to Second to None

5 Have as much fun as possible doing all the aforementioned.

6 Try to stop talking long enough to take some pictures.

Thank you so much to these lovely ladies for inviting me to join in the fun. I had a blast! I ended up with sore cheekbones from laughing so much. Always a good sign. xx
Posted by freckleface at 06:09 25 comments

Email ThisBlogThis!Share to TwitterShare to FacebookShare to Pinterest
Labels: blogging buddies, out and about 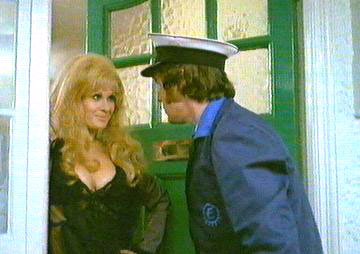 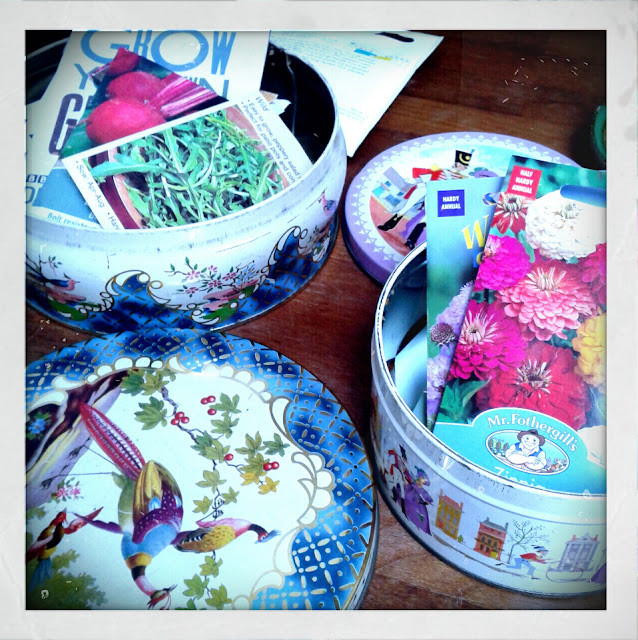 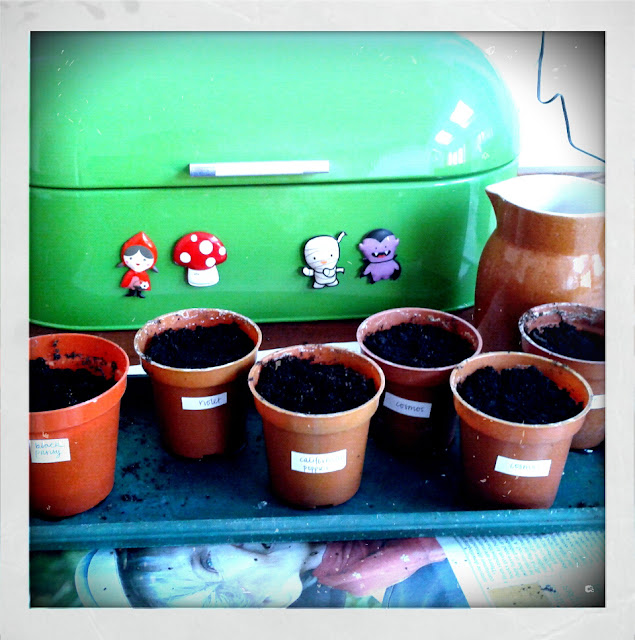 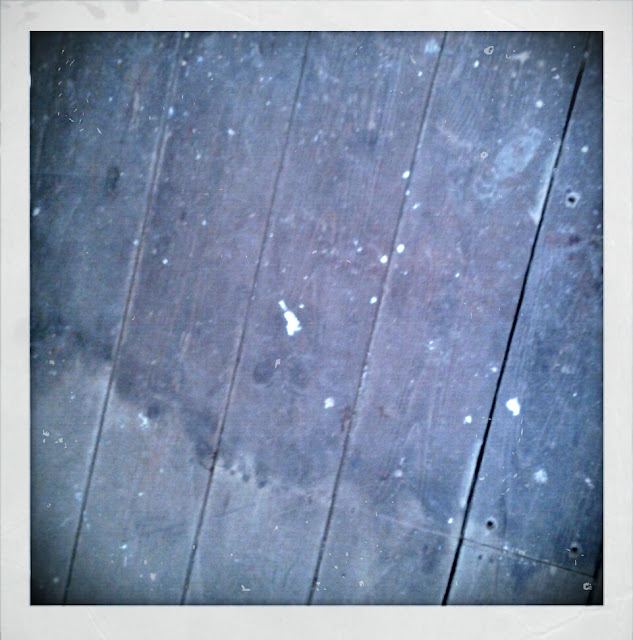 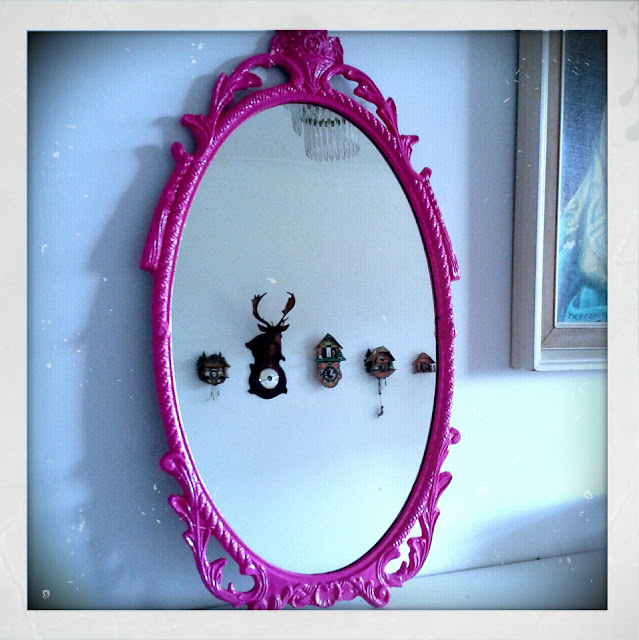 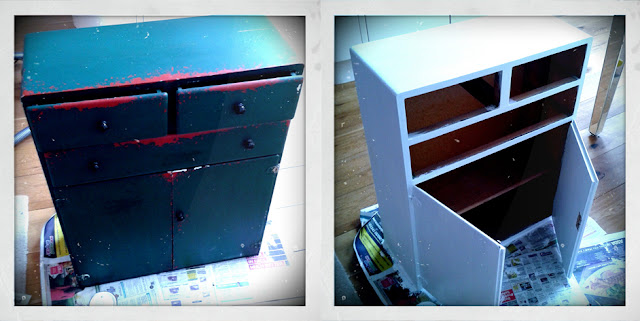 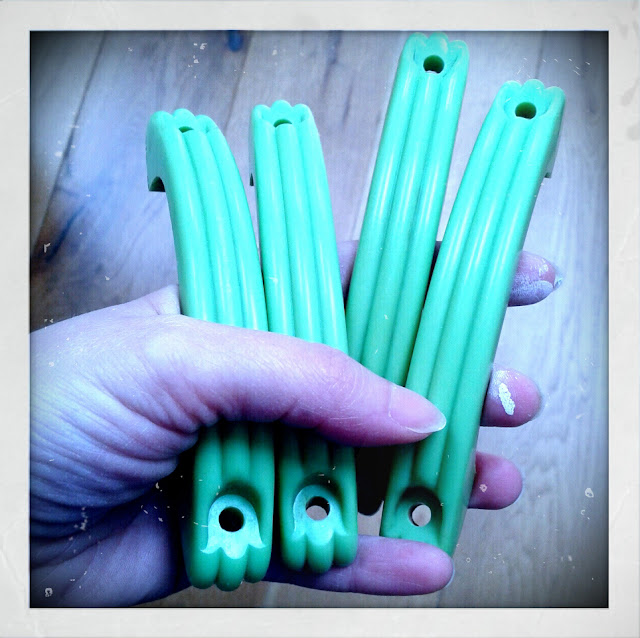 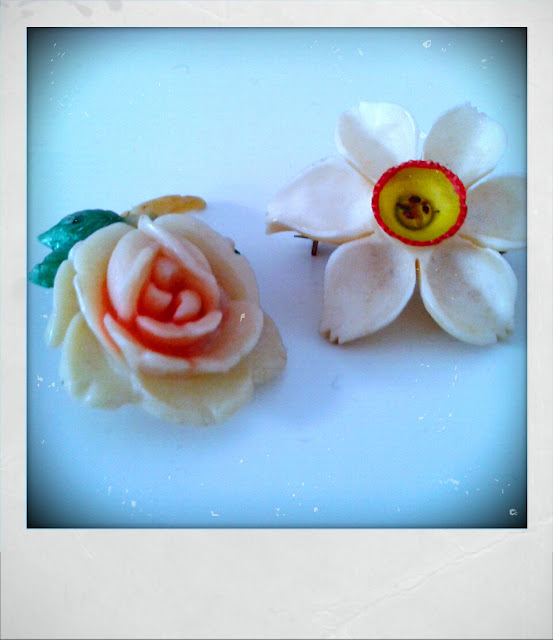 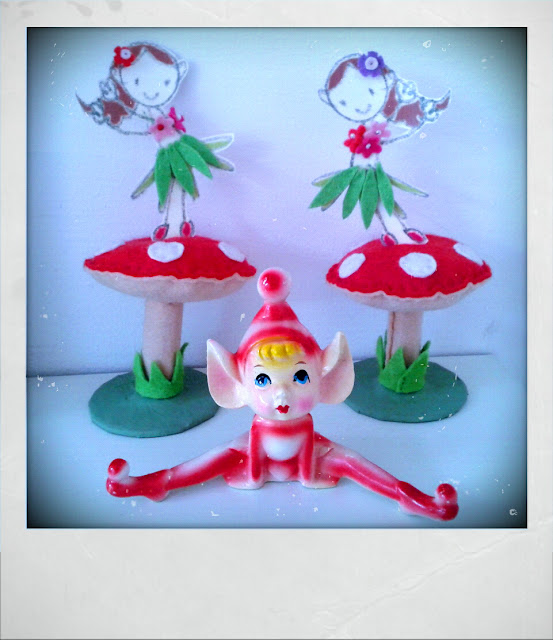 What have you all been up to then? Chocfest or virtuous? Home alone or out on the town?
Posted by freckleface at 10:11 11 comments