'Tis the season to be sociable, fa-la-la-la-la, la-la-la-la

The invitation said come any time after 5pm. But we have insider information. Experience has taught us that there are two distinct phases to Jane and Paul's parties. I like to arrive somewhere between eight and half past. When I hear the words, 'You've just missed all the kids, it was very noisy', I nod silently, knowing I've done the right thing. 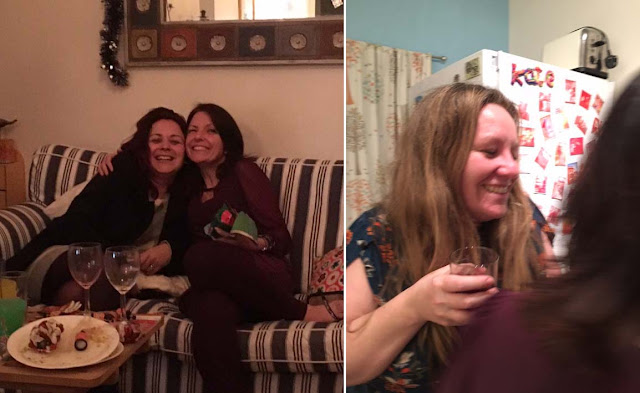 This is my pub quiz crowd. We've known each other for twenty years, since we were neighbours in our previous house. Jane and Paul used to live three doors away, but then eventually they moved. Once they'd settled in and established that it was a nice neighbourhood, we followed them and now we live four doors away.

They can run, but they can't hide. 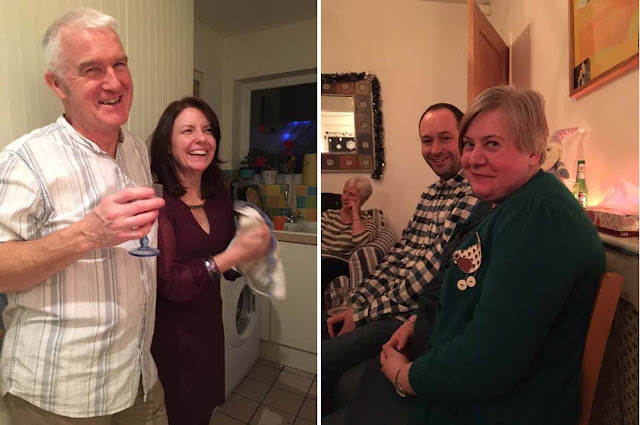 Last night the gang was being lippy. Saying things like, 'It's getting late, must be time for Q and Tania to arrive soon'. 'She's probably just pulling down a pair of curtains and whipping up a dress to wear'. 'Yes, and taking some photos for her blog'. Cheeky beggars. :)
After all that talk of blogging, I decided the least I could do was feature them all.
I've also been out and about catching up with people. Like my lovely friend Angela. I've known her even longer. The first time I ever saw her was when she came and did a talk on my teacher training course. She was warm, funny, intelligent and insightful and I took to her immediately. 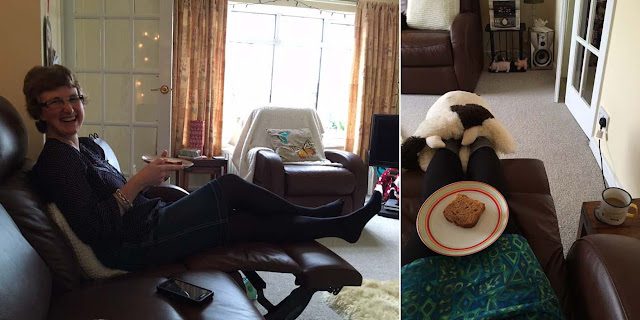 Not long after I qualified, I was invited to teach a group of visiting Professors from Minsk University. Angela was one of the other lecturers, and over the next few years teaching at the University together, we became great friends.


She lives up in the north of the county now. Since I always get lost when I drive anywhere unfamiliar, when I turned up half an hour late with a sorry tale of wrong turnings and poor road signage, she welcomed me in with lots of laughter and great hospitality. She has cream carpets, so like the good girl I am, I took my shoes off. She immediately offered a huge cow slipper for my feet, sat me down on the lazy boy sofa, and produced coffee and cake. Now that's what you call a welcome!
At my current rate of blogging, we'll be well into 2016 before I trouble you again, so eat, drink and be merry, and I'll see you on the other side.
Posted by freckleface at 03:24

Email ThisBlogThis!Share to TwitterShare to FacebookShare to Pinterest
Labels: freckleface, freckleface blog, friends, out and about, what i wore

Lovely! I do like to arrive after the kiddies have gone too. Years ago I'd be right in the thick of it with the little ones; games, face painting and all that malarkey. Those days have gone!
Yep, definitely some Moria Shearer goin on in that gorgeous frock. Is there nothing you don;t look fabulous in?!
That is a proper welcome and what a wonderful smile Angela has.
Have a wonderful Christmas and heres to 2016>
Cheers!
xxxxxx

Have a great Christmas!

I'd have avoided the kids too. I like them, but I prefer my parties with big people (and copious alcohol...). You did a great job adapting that dress; I'd never have guessed it wasn't meant for an adult.

Oh Yes!! The Red Shoes. Absolutely!! You look like a fairy princess. I knew you would. It came out beautifully. It's so funny how the "regular people" respond to our bloggy projects. I always get "So what's the story with THIS outfit?" My family is so confused by it all. Here's to friends new and old. Cheers!!!

You have been a busy social butterfly. Plus you had a VIP guest staying!��
Good to see the white dress out and about; you look lovely in it.
Looking forward to more freckleface blogs in 2016... Xx

Wonderful transformation of the dress and it looked lovely on you. I wish I could sew but I can't and there it is.

When I made my Holy Communion (aged 7) in my dress and veil, a little boy I played with called out to his mum "Mum, come quick, Veronica's getting married!"

Nothing beats good friends does it?

We're at the stage now where the kids are old enough to entertain themselves and not get under our feet (or stop the adult chatting and drinking) so hurray for that! But in general your strategy is wise - wait till the noisy littlies have gone, the grown-ups are nicely relaxed (a bit tiddly) and then make your entrance. And looking like the Christmas fairy, or a nativity Angel, is a very good idea too! The notion of you squeezing your frontage into a communion frock did make me chuckle - you've done a lovely job of turning it into a ballerina dress!
You've got a good crew of mates there, don't you just love having fab folk in your life, and your neighbourhood? And the ones who live a bit further away? Well, you get the joy of visiting - with added slippers!
Happy Christmas to you and Q - we'll be making plans for the next meet-up before you know it! xxxxx

Best time to arrive is when the ankle biters have gone, and I am a mother!! Your frock is divine, a twirl worthy frock I bet. I love catching up with old friends and have lots of them to catch up with over the festive season. Have a weekend festive time up North as I know I will down here in the sunshine :-)

You sound like a very sensible woman... how I wish I could dodge the kids on xmas day! I will be sharing my festive meal with 18 month old twins, a five year old and grunting teens. Deep joy.
How clever are you to work your fairy magic on that fab frock? You look stunning. Your mate Angela looks a hoot...I wonder if she bought that jumper? Have the coolest yule Tania.
xx