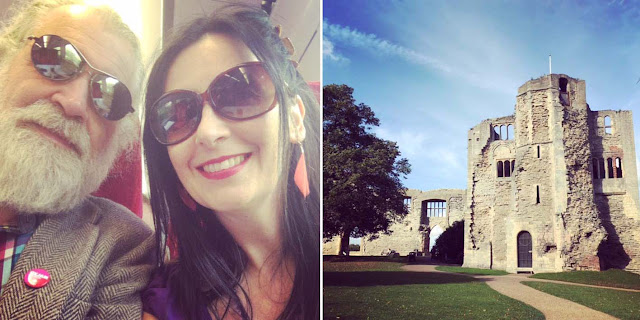 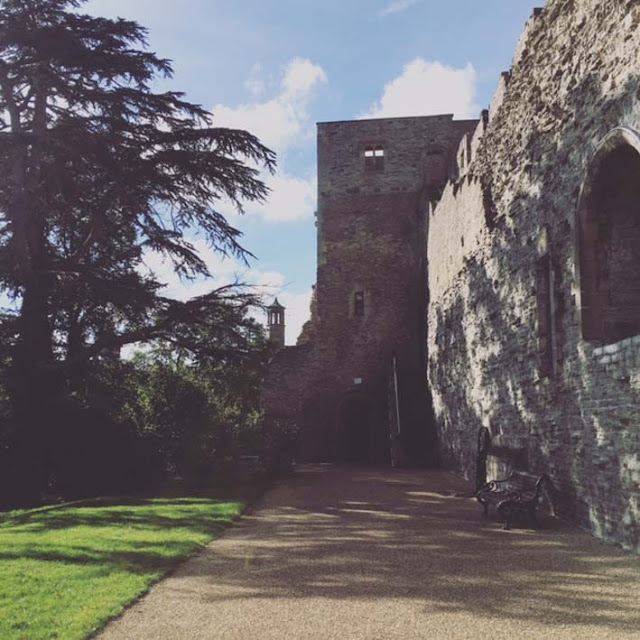 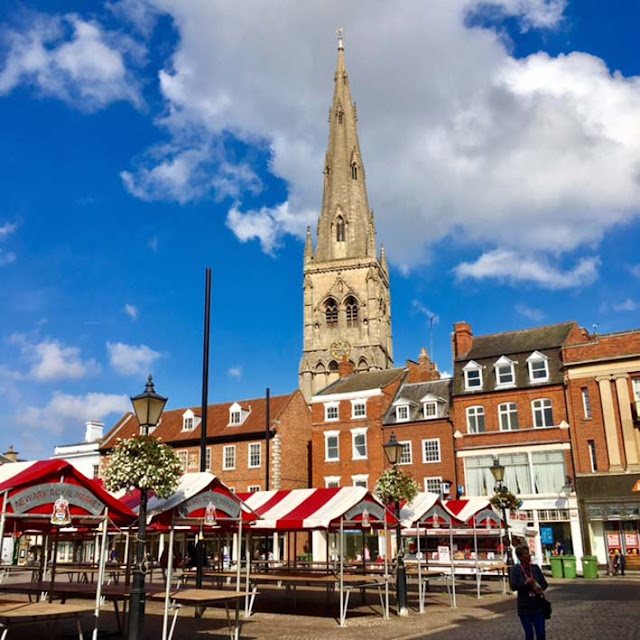 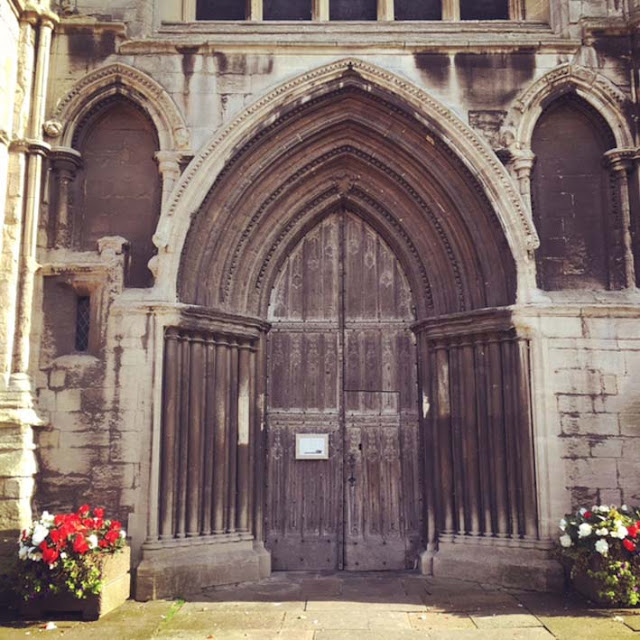 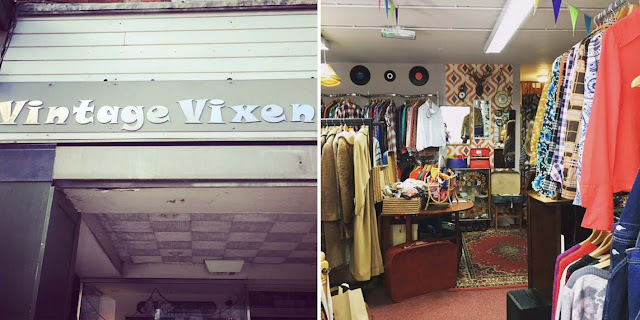 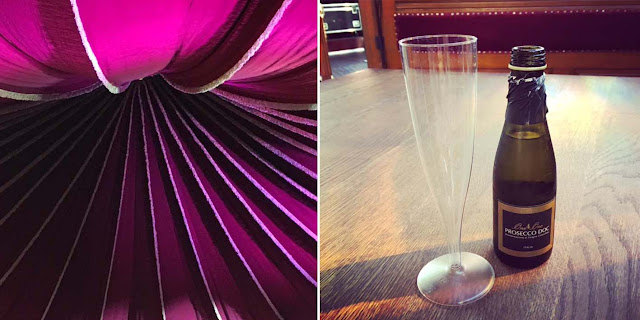 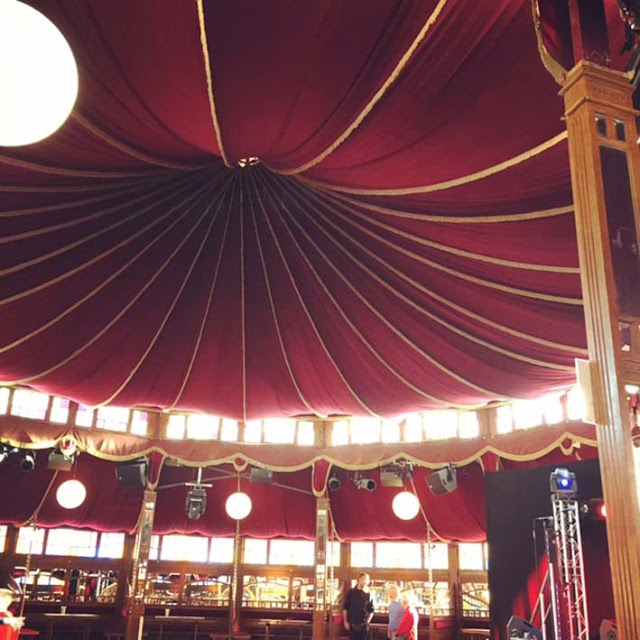 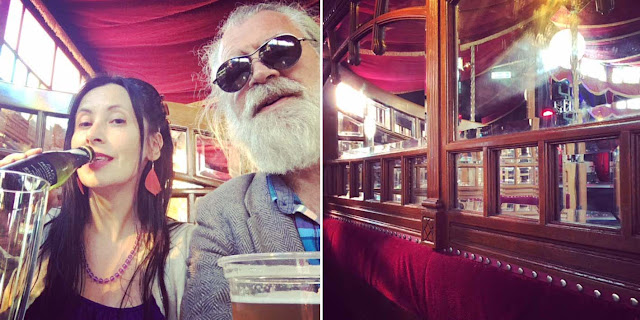 After all that excitement we went home and had a cheese and wine evening for two. The perfect end to a perfect day.
Posted by freckleface at 10:52

I love to let the train take the strain, for all the reasons you mention. I do like a nosey in folks gardens (and houses, if truth be told) Newark looks splendid, as you say, almost continental with sunshine, azure skies and red and white stripy awnings. Your patchwork maxi looks fab from where I'm sitting (I wonder if Henrietta was a needlewoman?) and I'd love a gander at your dirndl and dungarees please. Great to get a glimpse of Q...he looks like one laid-back dude. Xx

That sounds like a fab day out! Scenery, architecture, nice nosh and wine - perfect. I think you were absolutely right to elevate it to a mini break.

What a nice couple you make. It's a shame you missed the flea market - they are few and far between, I believe. I've never been to Newark so this was a lovely introduction. I loved the ancient graffiti especially. Vintage Vixen looked pretty cool, too.

As for you in your patchwork skirt - you look lovely. Clever you making it yourself - you reminded me of a fairy tale character in your outfit; basket at the ready to gather flowers from an enchanted meadow.

Hope you have a lovely week

How lovely to have a spontaneous day out soaking up the autumnal sunshine. it's been so warm here can't believe it's mid October.
The canopy in the Spiegeltent looks amazing : the colour is wonderful . Very Dietrich.
Xxxx

I like the idea of your day out on a train rather than the car. We need to try that. It did freak me a bit though as I saw the film "The Girl On A Train" last week. Its was spellbinding. Well worth seeing.
I've heard of the Vintage Vixen as well, it looks like a good foraging shop.
The patchwork curtains I started with such enthusiasm have been assigned to the WIP pile. Maybe I could donate them to your skirt haha.
Xxxxx

Newark looks fab, even without the Spiegeltent. WITH the spiegeltent... I can just imagine drinking champagne and getting my Marlene on there.

Your skirt looks great. It should be nice and warm, at least - on the radio they said we were due for a cold snap across the UK.

Another place I've never been too to add to the list! Nothing like an impromptu day out especially when the weather is lovely.

Train all the way I say and I do get a bit grumpy if I have to drive anywhere!! That looks like a brilliant day trip with loads to see. I do like a church door...I've been touring graveyards (as you do) and have seen a couple of stonking ones. I like old graffiti too.
Vintage Vixen looks rather lush and can't wait to see your finds.xxx

That skirt is ace, we'd be twins if I wore that mad patchwork dress Krista sent me!
Newark (and the pair of you) looks ace. Is that where they have that big antique fair that's often on the BBC? The church is a stunner. Wouldn't mind that door on our house! Had to laugh at you tossing your coins in the rainfall bucket. that'll be a nice surprise for the vicar.
That Famous Spiegeltent is a beauty. that's a tent and a half, isn't it? xxxx

this all looks and sounds lovely, the Spiegeltent especially - what an amazing looking place!
I did chuckle at the rain buckets though - that's exactly the sort of thing I'd do!