Our (Wo)Man in Havana


So that's it. I'm 50 now. After months of milking it, with various different events, we went to Cuba for my actual birthday. 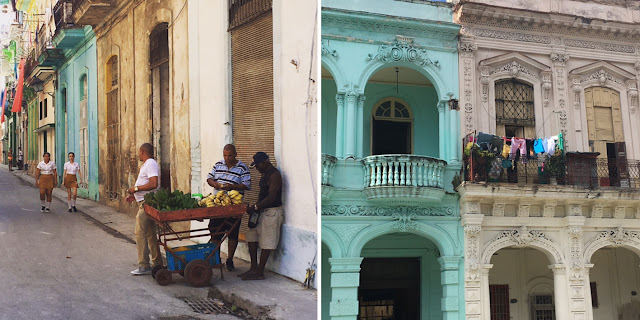 I really don't know where to start. Cuba is such a full-on experience. Our time there was multi-layered, with each day adding something new to the experience. In fact I'd call it an adventure, rather than a holiday.

We stayed in cities and in the countryside, spent time at the beach and on the road, and every day was full to the brim of sights and sounds and people.
Cuba is a noisy, busy place, possibly one of the most difficult places to take photos, because everyone is on the move constantly and there are always people around. You take a shot and before the clicker goes, a bus has whizzed by or someone has arrived in the deserted hallway you thought looked attractive. 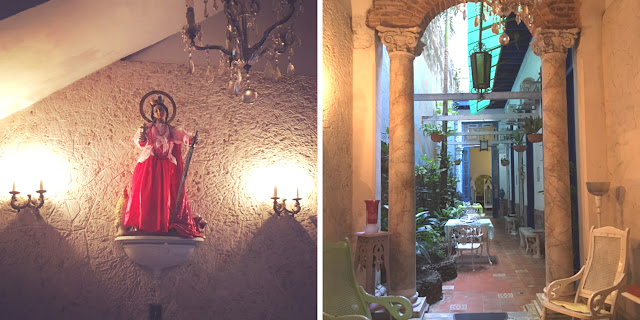 Because so much of it is deprived and in a state of degradation, it feels voyeuristic to take photos of people and their homes. What we consider to be faded grandeur or poetic decay is actually real life hardship for the people of Cuba, and it doesn't feel right to enjoy that. So, often, you keep your camera in your pocket.
We went now because we thought that Cuba might change and we wanted to see it in its 'authentic' state. But the reality of that is that this so-called 'authenticity' is hardship.

The truth is, Cuba needs to change, but in the right way for them. The people desperately want progress. They want the internet, decent wages, trade with America so that they can get things like parts for cars and goods in the shops, freedom to travel and generally to be up to date with the world.
They are incredibly intelligent, well-qualified people and they don't want to be patronised. They understand that they are living in a time-warp and whilst they are fiercely proud of their country, they want the chance to be current and modern.
So, what did we do? We elected to stay in Casa Particulares rather than hotels. These are homes belonging to Cubans, where you stay in an ensuite room and effectively live with the family. They cook you breakfast and dinner, do your laundry, organise your trips and transport, and look after you like you are their children. All you have to do is enjoy the luxury of being on the receiving end of all this precious care and loving attention, try to speak a little bit of Spanish and fall in love with them. They make it so easy. 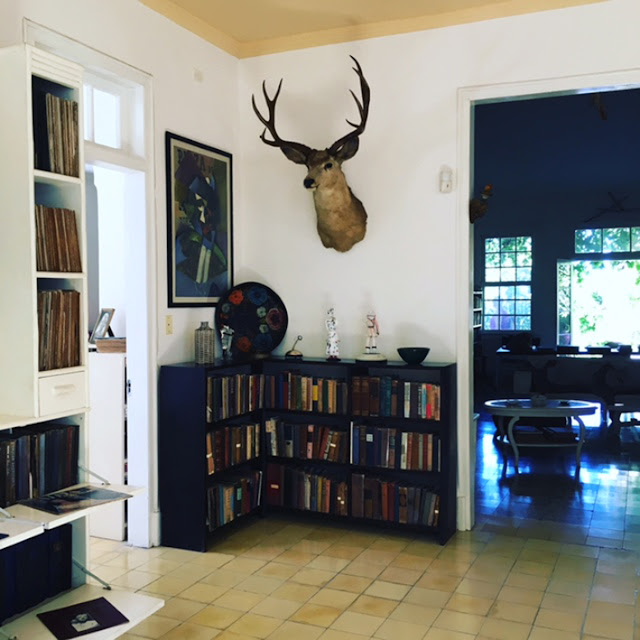 The number one tip I would give to anyone thinking of travelling to Cuba is to learn Spanish. Cubans have very few opportunities for International travel, in fact a lot of them haven't even had the chance to visit other parts of their own country. So us privileged members of the English-speaking world need to do a bit of work.
Luckily for me, I love languages. Many years ago, I used to teach English as a Foreign Language, and it struck me that in order to understand what my students were going through, maybe I needed to learn a new language. So I went to Spanish evening classes for a term and, my goodness, it has held me in good stead.
More often than not, we stayed in Casas where they only spoke Spanish, and somehow we managed. I was seriously punching above my weight, but somehow, we understood each other and had conversations about really meaningful things and on occasion laughed until we cried. I have no idea how. I think it might have been magic. I know it felt like it.
When we first arrived, it felt really difficult. On our first full day, we walked here there and everywhere trying to get bus tickets to take us from Havana to Vinales. A fruitless task. We were dismissed, sent from pillar to post, so that when somebody offered us a different solution, we were willing to take it regardless of what it involved.
We booked our first collectivo taxi. The man at the office said, 'I just need to tell you that there may be one or maybe two other people in your taxi.' We said, 'That's fine'. 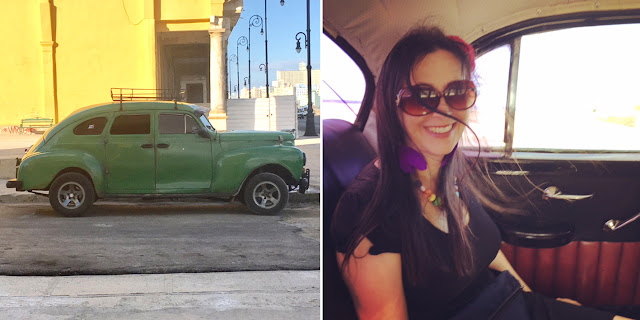 Of course he was having a fine joke at our expense. There were nine of us in the taxi, which when it turned up was a 1940s Dodge. Straight out of the film Casablanca, with a steering wheel from a Seat, seats from a 1970s Lada, handcarved wooden door handles, and all manner of ingenious extras. Truly the Turner Prize of Heath Robinson inventions. I absolutely loved it. Spent half the journey chuckling to myself. 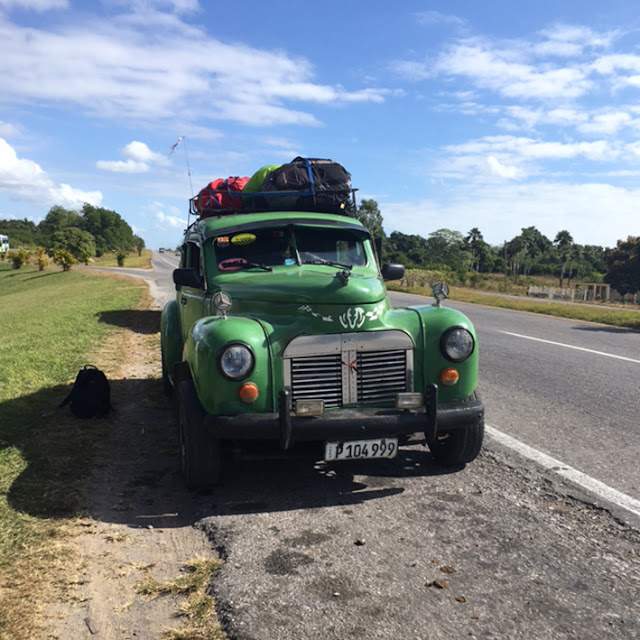 After a few days, something shifts and suddenly it starts to feel OK. Even seasoned travellers that we met said the same thing. From then on, you're fine. It looks chaotic. It looks like there's no system, but somehow, with a beer at lunchtime to help proceedings, everything works. 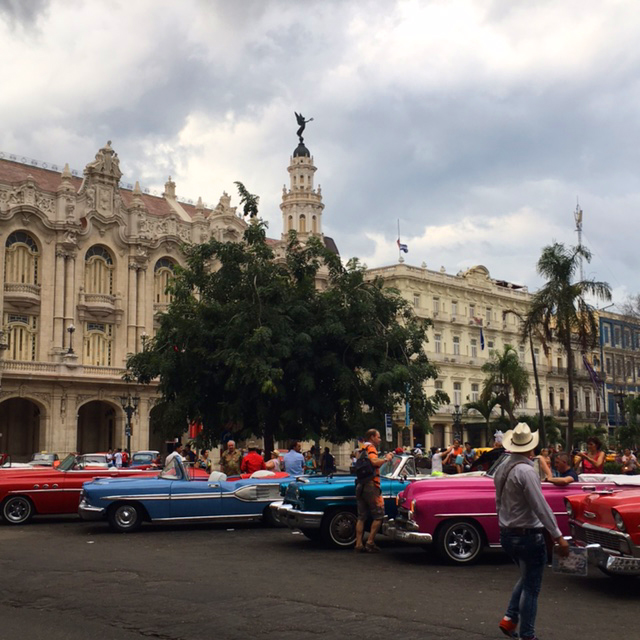 I spent months preparing for this holiday. I spoke to everybody I knew who had been to Cuba. I spent ages, trying to sort out accommodation and travel and excursions. All I needed for any of them to say, (which strangely none of them did) was, 'Don't worry, the Casa will sort out everything for you'. I mean really. They sort everything. If only I had known, it would have saved me so much worry and hassle. Those ladies are AMAZING. They know everyone and everything. Don't waste your time. Let them look after you. It's their job, their talent and their pleasure. They really want you to love your time in their country.

Well, seems I had plenty to say! And there will be more...
Posted by freckleface at 08:37

So that's where you've been ! What a fabulous, interesting post Tania. I knew you would never do Cuba from an all inclusive hotel! The casas look amazing, what an incredible experience to live along side Cuban families. I'm learning lots about Cuba this week....am halfway through doing a translation from French about Castro's life and death.
Can't wait for more...
xx
Oh and by the way, belated happy 50th!

Oh Tania, what a wonderful post. I want to go before Trump fucks it all up.
Where do I start? It sounds like the rip of a lifetime and thank goodness you had the foresight to brush up on your Spanish.
Many people I've spoken to stay at all-inclusives on beaches where Cubans aren't even allowed to sit. Your way isn't even comparable, staying with locals, helping them financially and enabling them to meet people from countries they can only dream of escaping to.
Your casa look magical and so do you. That car is cray but entirely wonderful.
More please! xxxx

This was such a wonderful post. I almost felt I was there with you in Cuba. It's such an amazing and unique place and I'd love to go - as you say it will be changing (or not,because of Turnip Head aka Trump,D)soon. You and Q look wonderful in the photos and that last car - the taxi - was brilliant.

I think I told you that my neighbours had just come back from Cuba as you were leaving. We haven't had a chance yet to catch up (ridiculous, I know, they're only next door!) with their experiences of Cuba and it will be interesting to see if it is similar (or not) to yours.

It's good to have you back - I missed you!

Hope you are adjusting back to the lovely British weather...

I'm glad there will be more because I love everything about this post Tania. Favourite photo? You in taxi.

I love this post: you have really captured the vibrancy and feel of Cuba. The colour stands out. The vintage cars are wonderful as are the casas. More please sis, I'm hooked now! XXXX

Cuba is a place that I would love to visit someday!

What a wonderful post, Tania. Like Fiona, I'd wondered where you were. Your Cuban adventure is the perfect excuse, and what an experience! Love the first Casa, with its courtyard and saint, and Casa Blanca is very quirky but also very ... err, white! I usually feel voyeuristic taking photographs of people or their homes. I'd be feeling very much out of my depth visiting somewhere without knowing at least a little bit of the local language. I think you'd somehow miss out on things. I did a Spanish evening course for a year when I was in my mid twenties, which has stood me in good stead at various occassions. xxx

What a fabulous holiday, the kind you remember for the rest of you life. Did you keep a journal?

Oh what a wonderful way to spend your 50th!! Cuba! My word. I've been wanting to visit for the longest time. I agree with Vix. I'd better get over there before President cheeseball fucks it up. Though lots and lots of us here in the US are watching him like a hawk and we're all betting that his fat ass doesn't make it through his first term. Fingers crossed. But what a lovely post, Tania. So beautiful and thoughtful. I have a good friend who escaped Cuba with her family when she was a toddler and went back to visit about 10 years ago. She told us some crazy stories about life there. And I love your stories as well. Happy belated birthday. Let's all paint our cars tropical colors!!

WOW!! Thanks for sharing your Cuban holiday, everything looked and sounded amazing. I love the old cars and the colours. I am sure things are going to change there, hopefully for the better for the people living there. Well done you on learning Spanish, talk about being prepared!! Thanks again for the holiday sharing.

(PS. If my comment doesn't show up as being from me, it's because Claud was signed in and I didn't realise - I can't keep up with this stuff!) x

It looks gorgeous. We went back in 200, before the rise of mass tourism on the island, but it doesn't look like Havana has changed massively. Though you had to stay in official hotels when we went - I should tell my husband about the Casas Particulares; he'll want to go again now.

How was the food? It was really variable when we went - all the restaurants were state-owned, so while we could eat identical meals in different places, the quality depended on how much the cook could be bothered. I'm guessing the food is better now!

I've heard people say they are going to Cuba butt they haven't done it the real way like you. Instead they have stayed in the luxury hotels and barely moved out, so why go all that way in the first place.
It's been wonderful to see it through your eyes and pictures Tania xxxx