Take the road signposted North. When you get there, take a right turn towards the East

We've had this on the mantelpiece for months, a golden invitation to an autumn wedding up in the beautiful Yorkshire dales. 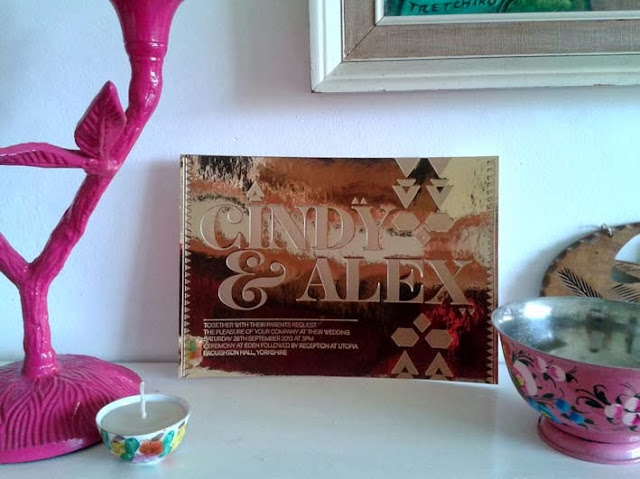 Him indoors is a Yorkshire man. I've noticed the further north we go, the happier he gets. Roots are important. 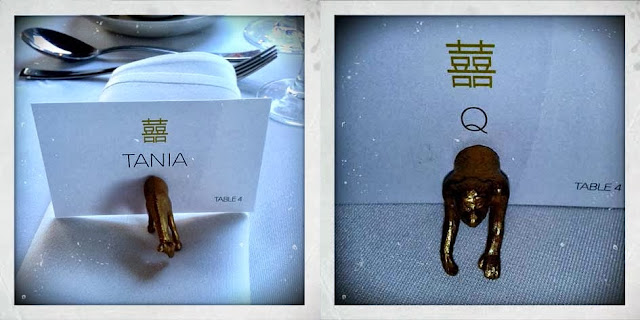 The wedding was designed in what was coined by one of the bridesmaids as bling minimalism. The colours were gold and white with the bride's Chinese heritage coming through strongly. Monkeys for the boys, horses for the girls as those are the Chinese horoscopes of the bride and groom.

We walked across fields on the Saturday to help set up for the reception. It was a beautiful day so I wore sandals. In a phrase that I like to use as to challenge the Universe, I said, 'What's the worst that can happen?'

If the Universe were on a dating website, I think it could allow itself a GSOH*. How do you suppose it responded? 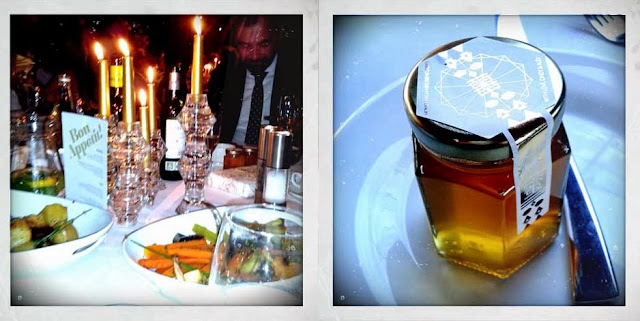 Food glorious food! We ate like kings. Every guest was given a favour of a jar of honey from the groom's mother's apiary. 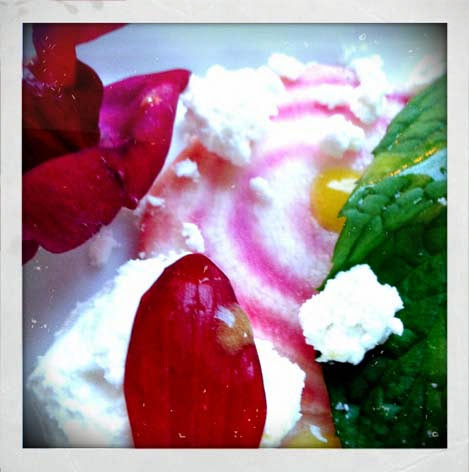 Carpaccio of red, golden and candy striped beetroot with goats cheese, mint leaves and flower petals and some kind of dressing. I felt like I'd wandered onto Master Chef. 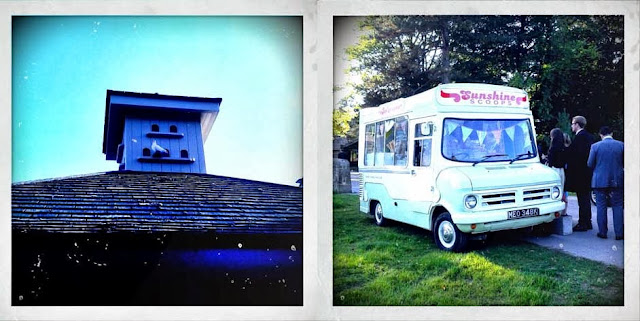 The venue was Broughton Hall, a 16th century pile which has been in the same family forever. The week before, the weather was shocking and Cindy told me that the venue had asked her what her contingency plan was. I didn't quite understand what she meant until I realised that the wedding was actually outside. In Yorkshire, at the end of September.

Email ThisBlogThis!Share to TwitterShare to FacebookShare to Pinterest
Labels: food glorious food, friends, out and about

Bloody hell, that's one bastard massive OBD! Not sure if we can top that, but I'm open to a challenge!
What a perfect wedding, the location, the food, the invites and the weather! Give me a jar of home produced honey over a net bag od iffy sweets any day of the week! Absolute perfection. Had they done a deal with the bloke upstairs?
Absolutely love that Chinoiserie table and that Siamese dancer. It's definitely not grim up north with finds like that.
Now, where did I put my deerstalker? xxxxxxxxxxxxxxxxxxx

Wow, what a posh wedding, thank heavens it didn't rain. How nice to get a jar of honey instead of those awful sugared almonds...does anyone actually like those??? What a result to find a flea market the next day, a perfect weekend I'd say.

Oh my goodness this sounds like one of the most beautiful weddings of all-time :)

Did you REALLY get that close ... ! He's a big boy!
Sounds like a fabulous wedding.
M x

You win. No OBD could top that fella, he's quite magnificent.
What a grand setting for a gorgeously foody wedding! From the invites to the honey to the dovecote to the ice cream van to the lights and the stars on the walk home- all magical. Well done, Universe.
I've been past Broughton Hall (an ex's parents lived in Barnoldswick) but never been in, it looks fabulous. Did you go to Skipton? Nice there too.
And you squeezed a flea market in too? Excellent ! Love the what-not and the carved figure, and yes, it's perfect that they fitted the Oriental theme. See? That clever old Universe came up trumps again! xxxxx

Oh and I'm intrigued by your partner's place card...

That's quite a flash wedding!!
What the buggery did you WEAR, darling?! G and I always enjoy a wedding; everybody is happy, and there's usually lots of booze, which makes up for food that may not be so good.
Roots are important, although I do feel further and further away from mine all the time...
XXXXXXXXXXXXXXXXXXXXXXXX

Such a magical wedding. All sparkly and tasty with a flea market on the way home! Perfection. As for the OBD, we don't have any around here. Mostly just coyotes and skunks. But I don't dare get close enough to either to take a photo!!

On Saturday morning a deer was running down the street I was driving on it was the saddest thing I have ever seen she was so scared and lost, had I snapped a photo it would come close;)

What a beautifully romantic wedding and location. I am a bit taken a back at the blue sky they truly were blessed. I can almost picture the starry walk home after and I love moments like that. Roots are a strange thing I yanked mine up 8 years ago and replanted in Oregon this finally feels like home, maybe we are all not born into a place but find one and make it so.

Great scores at the flea market. Where is your obligatory selfie;)
Xxxxxxoooooo

oh what a lovely place to get married :) just found you, love it x

It looks like a really lovely wedding and what a lovely wedding favour, I love honey! The flea market finds are really sweet and oh boy did you get close or what. Most certainly a big boy, that's for sure! xoxo

Perfect wedding and wonderful location.
Thank you for sharing, my friend
XXXXXXXXXXXXXXX

Do you actually own that OBD? Because I'm not sure it actually counts unless you do!