I remember the first time I encountered her, although the detail is hazy. It must have been nearly 30 years ago, in a magazine article. There was a photo of her in her bedroom and she was wearing a beaded flapper dress. She talked about her life and her love of vintage clothing. I tore the article out and periodically returned to reabsorb it.

Around that time I also wore vintage clothing and bought a stuffed bear's head, because I believed I would need it when I moved into my castle.
Lisa St A de T became a hero of mine and remains so to this day. I would always look in Waterstone's to see if she had brought out anything new. Once the internet came along that was a lovely way of keeping in touch, to see which fascinating part of her life she was playing out in which corner of the globe.

I remember reading that she lived in Amsterdam. Somehow after the Venezuelan Andes and rural Umbria it didn't seem quite right. But it turns out she is now in Africa. Wonderful Africa. Ah, that's better.


As well as ordering this new book, I've just discovered she has a blog!  What an amazing thing! 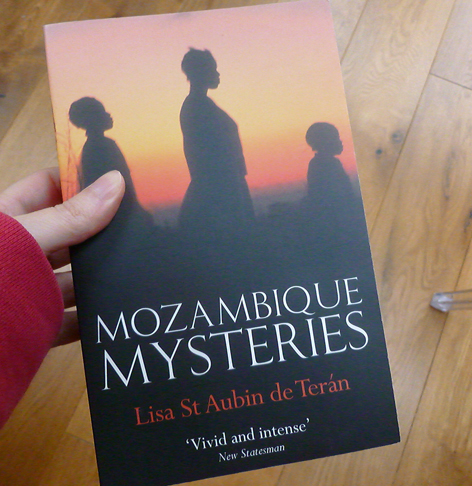 For those of you who don't yet know her, she seems to me to be a true original. She has lived a life of adventure based on a love of travel and people, and having the courage to take chances and not follow the rules too closely. Often done in beautiful outfits. I hope that description hasn't diminished her.

A few year's ago, we went on holiday to Cannes for a week, most of which we spent on Ile Sainte-Marguerite. Apart from being famous for the fortress which housed the Man with the Iron Mask, it was a beautiful island covered in the most wonderful vivid bluey-purple flower, called Morning Glory. I remembered how desperately she tried to grow it in the Andes to no avail, and I thought at the time, Lisa St Aubin de Teran would like it here.

I seem to have come over a bit arty farty today. Normal service will be resumed very soon, but before it does, do you have a favourite writer? I'd love to hear whose writing transports you.
Posted by freckleface at 09:27

OMG OMG OMG!!!!
I'm SO excited, Lisa St Aubin de Teran is MY favourite writer!!!
Her sutobiographies are also my favourites, I must have read Off the Rails and A Valley in Italy a hundred times! Not to mention The Hacienda! I think I have almost everything by her, and I also have the novel by her daughter, Iseult!Have you read that? My fave novel of hers is The Slow Train to Milan, and I also love Joanna. I don't have the Mozambique one, must get onto that!
She's always been an inspiration to me, she has lived an uncompromising life of amazingness!
I had no idea she had a blog, despite periodically looking to see what she's up to!
EEEEEEEEEEEEEEEEEK!
Hi there, kindred spirit!
XXX

OMG OMG OMG I can't tell you how thrilled I am to hear that. That is SOSOSO exciting. She is truly wonderful isn't she? I HAVE read the one by Iseult, how could I resist when I found it? Especially having read about her since her birth. But I haven't read The Slow Train to Milan, must get on to that. I have ordered another one called Memory Maps because apparently that is an autobiography which follows on from A Valley in Italy. Oh I have to tell you, I have this habit of looking for common ground with other people when I admire them, bit sad probably, but on her rail travels she went to Casole d'Elsa and Colle di Val d'Elsa. Well, my friend from Italy lives a couple of miles from Casole and whenever I go there I think oooh Lisa St A de T has been here. Feel like a teenager talking about my favourite boyband!! Thanks Helga, this has been wonderful! xxxx

I am going to the library.
I love this post. I've loved reading about Lisa, your passion for her novels, and those awesome pics. The sequin/baby/badger one is gorgeous, but my fave is you Ms Freckleface and your bear. Wonderful.

I'll let you know what I think of her stories x

Oh that is really wonderful that you are both going to give her a whirl. I will be so interested to hear what you think. I feel sure you will have no choice but to join our little fan club! xx

Though I have heard of her and her work, I have never read anything by Lisa St Aubin de Teran. An impressive name! But since you, and Helga, give her writing such wholehearted endorsement, I'll give her a go.
Like Kylie, I really liked seeing the photo of you!
I don't have favourite authors really, more individual favourite books, but I have enjoyed everything I have read by Kate Atkinson, Sarah Waters, Alice Hoffman, Anne Tyler, Barbara Kingsolver and Angela Carter. Hmm, where are the men? I also love John Connolly's thriller series featuring Charlie Parker (violent American Gothic, tho he's actually Irish) and Jo Nesbo's Harry Hole books. A creative mix of fantasy, the supernatural, grim reality and quirky whimsy! xxxxx

Ooh you've given plenty to think about there! I have read Angela Carter, some Kate Atkinson and Sarah Waters, plus a bit of Jo Nesbo, but the rest are entirely new to me. Thanks for the lovely recommendations, it's lovely to be introduced to new writers.

So. I just spent a while loopdilooing thru her blog just as I like to loopdiloo thru yours. How fun to find a new author. Thank you!

This morning I was working with a group of local women to plant aloe vera for their soap co-operative, but it was so hot I crawled inside to spend a bit of time on the internet and cool off. What a lovely surprise to see this blog. i have been living on the edge of the Indian Ocean for ten years now and am very cut off here in the bush. There are many advantages to sich a lifestyle, but the disadvantage is how much I have neglected my literary career. So, as a literary has-been, it made my day to find such an enthusiastic fan.

I hope you find your way here one day www.teranfoundation.org come and stay at Sunset www.sunsetboulevard.com and enjoy the aloe vera gardens the local ladies are planting around our community lodge in the middle of nowhere.

So glad to find other 'mad about Lisa St Aubin De Teran' people.What an amazing writer. The Book The Hacienda almost carries you off to Venezuela. The book inspired me at a time when I really needed inspiration. I too married very young , 22 , a madman a bit older than me. Who I'd known 6 weeks.The book inspired me to escape with my 2 children back to my own country. While it took me a long time to find the courage. I did it in the end. And fought every battle to keep my children. Lisa's courage and meticulous planning. And willingness to teach herself things has served as a role model for me. I've read most of her books. Rarely do you find a writer who lives a lifestyle that entertains and appeals. And with brutal honesty. Keep on writing Lisa.

Omg!!! There are some of us!! She is absolutely my favorite writer!! Thank you for having this!

Hey everyone, how lovely it is to read such praise for my mum's work! With love to you all, Florence Duff-Scott